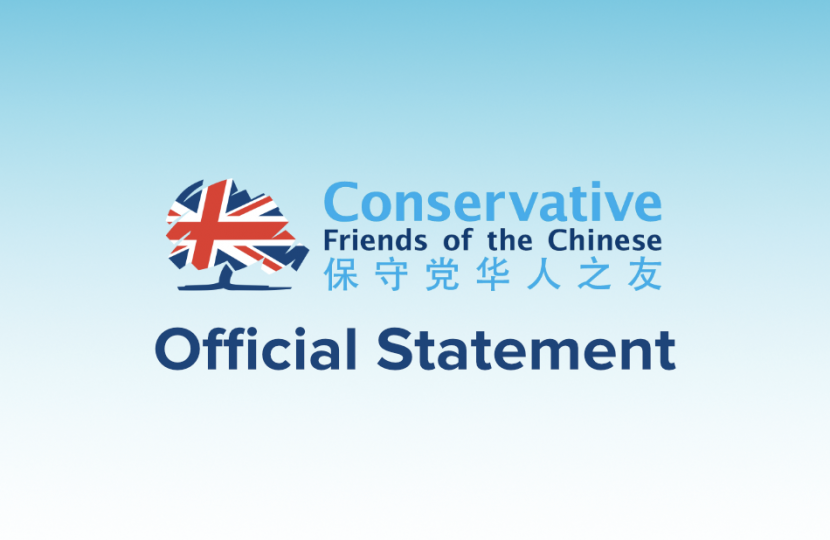 The Board of the Conservative Friends of the Chinese (CFOC) is writing to you to raise very worrying concerns about the record high levels of sinophobia and xenophobia observed in recent months. These often manifest in racially motivated hate incidents and crimes targeted against the British Chinese communities, and also those of East and South-East Asian heritage in the UK during the current Covid-19 pandemic.

CFOC is a member-led organisation representing British Chinese Communities across the UK. Our group also consists of other Chinese communities including those from Mainland China, Hong Kong and Taiwan and also Commonwealth countries including Singapore, Malaysia, Mauritius and the Caribbean. For the avoidance of doubt, the British Chinese community is entirely separate and distinct from Mainland China and is itself a community diverse in both identity, culture and views.

We feel it is now necessary to write to you to highlight the unacceptable pain, suffering and consequences of such abusive acts, comments and rhetoric made against many in the Chinese communities during this pandemic and also in response to the People’s Republic of China’s on-going political stance on matters including Hong Kong and the pandemic.

Alarmingly there have been a record number of racially aggravated incidents across the UK which includes nearly 300 offences of racial hate crimes against all British Chinese communities in the first 3 months of 2020, compared to 375 offences recorded in 2019. London has seen a three-fold increase in racial hate crimes compared to the same period in 2019.  British Chinese businesses have also seen a sharp drop in trade as fear and misunderstanding provoked this backlash since January, and across the country children of East and South-East Asian heritage have also experienced abuse from their peers.

Scapegoating the Chinese communities is totally inexcusable, as they are not the purveyors of this virus or the current pandemic. We trust that you will work with us to adopt a zero-tolerance policy and we also urge you to utilise your public platforms to offer your support for the British Chinese and also all other Chinese Communities in the UK and condemn all such intolerable racial hate crimes, incidents or incitements.

The British Chinese communities have long contributed immensely to British society. Many share our strong Conservative values of hard work, strong families, aspirations and through their professional and business endeavours have also contributed greatly to the ongoing success of the UK and its economy. Many are also actively involved in our collective 'battle', including key working in our NHS, schools, care homes, volunteering and charity work.

We fully support our Government’s commitment to the rule of law in HK and their proposal to offer additional visa rights to holders of British National Overseas. We welcome this development as their diversity of talent, experience and entrepreneurial success will contribute to the UK’s continuing success as a global force.

We appreciate that the on-going tensions between UK and China are extremely delicate in the current climate . Nevertheless, we are keen to ensure that we continue to maintain a balanced approach and if we are able to contribute to the Government’s efforts to continue to maintain a sustainable and working business relationship with China, we would very much like to offer our support, cultural insights and experience as we are able to draw upon the vast reservoir of talent and experience of our Chinese communities.

In a post-Brexit and post-Covid 19 global Britain, we will need to rely on our large networks of diverse local talents to enable us to expand our trade relations with all countries, including those from the East to be a truly global and flourishing country. The CFOC looks forward to supporting you and the Government on this.

Sir Geoffrey Clifton-Brown MP and Sheela Mackintosh-Stewart,
Co-Chairman
On behalf of the Board of the Conservative Friends of the Chinese

Conservative Friends of the Chinese

Two Years On: Delivering on our Promises

Two years on, we have delivered for Britain. Here's a list of some of our top achievements.