British Chinese communities, the Conservative Party and the local elections 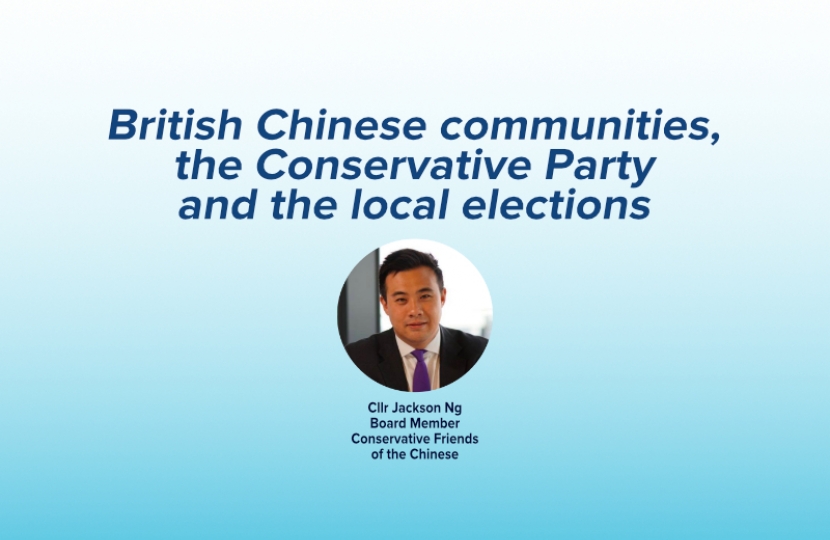 Cllr. Jackson Ng is Councillor for Beaconsfield Town Council and the Deputy Chair of Beaconsfield Conservative (of the largest Conservative Associations in the UK). He stood in the 2015 and 2017 General Elections. Cllr. Jackson Ng is an Executive Board Member of the Conservative Friends of the Chinese (CFOC), a Coordinator for the Conservative Party's Candidates List and was also previously a Political Advisor in UK Parliament. He is a Barrister who currently works for an international public relations agency and writes in his personal capacity below.

I am proud to have help set up and lead the Conservative Friends of the Chinese (CFOC) as its Political Director from 2013-2017. Our Group was launched by Boris Johnson, the then Mayor of London (Foreign Secretary now) in the summer of 2013 to promote links between the British Chinese communities and the Conservative Party as well as enhancing the political, economic and cultural relations between the UK and China.

CFOC has been playing a substantial role in encouraging and providing the platforms for our communities to engage in British politics. To date, we have organised over 25 community engagement events with senior government ministers and parliamentarians attending, devised and executed political campaigns and provided the support to nurture the next generation of British Chinese Conservative Party members. Our work has contributed significantly to how the British Chinese communities have transformed from one that was known to be silent to one that understands and utilises politics as an important mechanism to "make things happen".

I am also proud to have worked so closely with my colleagues on the building of UK China bilateral relations which has led to the Golden Era of relations between both countries. For example, in March earlier this year, alongside the UK China Visitor Alliance, the Secretary of State for the Department of Digital, Culture, Media and Sport - the Rt. Hon. Matthew Hancock MP, we announced the new Chinese Visitor Working Group's partnership with VisitBritain, which aims to explore a range of practical initiatives to attract even more Chinese visitors to the UK. This will encourage domestic economic growth and improve further bridges of understanding between the British and Chinese.

Today, I am extremely proud to see that there is a record number of 18 Britons of Chinese origin standing for the upcoming local election in May. This, along with again the record number of parliamentary candidates in 2015 and 2017 are evidential of the performance and influence of our Group both within the British Chinese communities and the Conservative Party. More importantly, it shows that the shared values between our communities and that of the Conservative Party are very similar; emphasis on values around Family, Education and Entrepreneurship.

I started working in frontline politics in 2011, 9 months after David Cameron became Prime Minister. Since then, one million fewer people are now living in absolute poverty than in 2010, including 300,000 children  - I am proud to be a tiny part of the team that achieved this and also to see many from our communities taking their first steps into the Conservative Party. This is why I support the Conservative Party -  to make Britain a better place - and I urge you all to do the same.